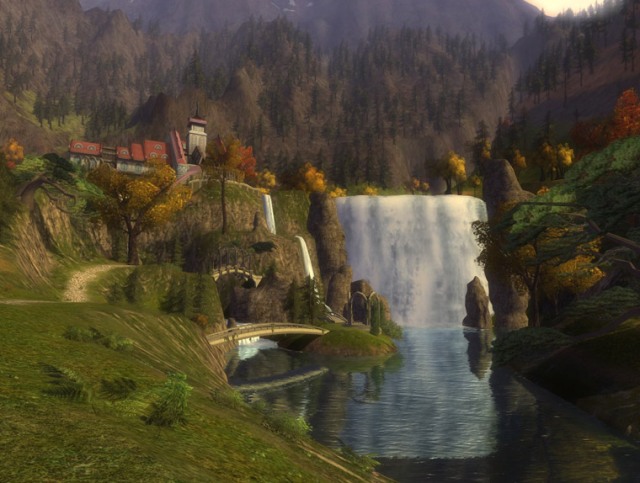 This Thursday night at 9:30 Eastern we’ll convene the fourth session of our monthly symposium (you know, a drinking party) on “Roots of Humanistic Game Criticism” inside the world of Turbine’s The Lord of the Rings Online (LOTRO). Last month we had a quasi-hallucinatory (thanks to Eric Swain’s transient apparent narcolepsy) discussion of whether play-mechanics and rules may be described as metaphors and/or abstractions. I plan to continue to explore the question with the specific case we introduced last time of Hit Points and the Health Bar.

If a metaphor is the replacement of one signifier by another, Hit Points are the replacement of health by a number. We’ll discuss. As last time, examples to be drawn from D&D, DragonAge, LOTRO, and my son’s elaborate fantasy-life.

As you may know, LOTRO is free-to-play (though of course there are ways to give Turbine your money if you should insist), so anyone who has a moderately capable PC and the time and patience to download the game should come along and see if the game and/or the symposium suit him or her.

On the other hand, several of our symposiasts have taken to not even playing the game, but rather enjoying the conversation straight up on Venrilo, which creates a unique and diverting dynamic. So if you don’t feel like playing, come to talk!

We’ll be on the Windfola server (called “world” in the LOTRO jargon). I will be playing on a toon (character) named Trianuil. If you haven’t played LOTRO before, you’ll have to allow ten minutes or so to get through a tutorial in which you learn to kill stuff and pick other stuff up. If you want to be with the VGHVI group, make an elf toon yourself, and join us in Ered Luin. More details available upon request, of course!

We’ll have discussion on Ventrilo, which is a free program that you can download and install in something like two minutes. Once you have it downloaded and installed, set up a server as follows: Name: vent108.light-speed.com; Port: 4383. Then email me at Roger Travis Jr (no spaces) at gmail dot you-know for the password, or let me know in-game via Tell on Thursday night that you need it. (Press [enter] and type “/tell Trianuil I’m with VGHVI”.) In any case, please comment here to let us know you’ll be there, and then, in-game, /say “VGHVI” so that we know you’re with us.

As before, I’d also very much like to hear what others are interested in discussing, whether it’s specific to LOTRO or a more general topic in the intersection of games and the humanities.

See you in Middle-Earth!

Classicist, game critic, game educator.
View all posts by rogertravisjr →
This entry was posted in Events and tagged Lord of the Rings Online, symposium. Bookmark the permalink.