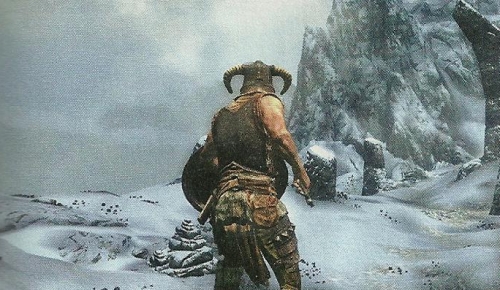 Mattie Brice and I are working together on what I’m hoping will be the next big (well, little, really) thing for VGHVI–giving some of our playversations and symposia a nachleben as podcasts. I’m enjoying that collaboration immensely, and I hope she is too, but any mutual affection may not be in evidence this Thursday. I’m thinking of this as the big Skyrim showdown, in the wake of Mattie’s provocative piece about Skyrim’s “embedded storyline” (her term, which as of now I’m not planning on disputing–though that may change).

In all seriousness, we’ve had some time since the wild claims of the prophets of emergence. How do we like embedded storylines in our sandboxes these days? If the proto-nerd at the playground who wants you to play “Underground Empire” with her/him in the tunnel system s/he’s dug in the sandbox is nice about it, and lets you use your pail in peace after you’ve made it clear that “Underground Empire” frankly seems fascist to you, is there any reason to complain to the authorities that said proto-nerd is ruining your fun?

Watch this space, and the comments, for the details on where we’ll be holding the conversation, and get ready to take an arrow in the knee!

UPDATE: We’ll be on Mattie’s Mumble server. Comment here with contact info for a missive from me with details, or find me on Google Plus, which should be easy enough.

Classicist, game critic, game educator.
View all posts by rogertravisjr →
This entry was posted in Events. Bookmark the permalink.